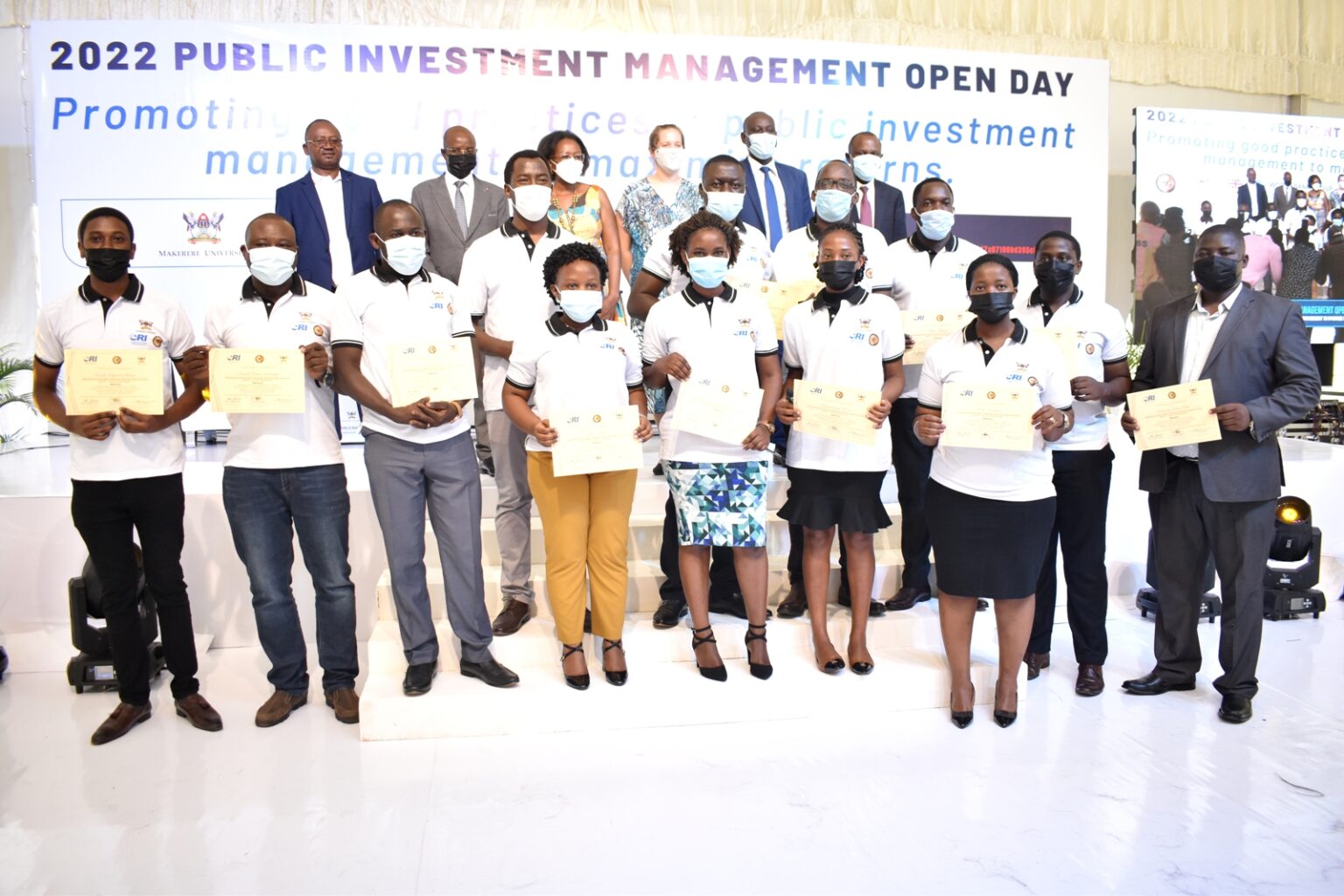 The center, with funding from the Foreign Commonwealth and Development Office of the UK government (FCDO) through the World Bnk, is expected to build capacity of officers involved in management of public investments. The launch of the center was preceded by an Open Day themed “promoting good practices in managing public investments to raise returns”.

The Centre of Excellence awarded certificates to 26 trainees from various government agencies, following a rigorous training in Financial & Risk Analysis.

In a quest to strengthen public investment management, the government of Uganda through the World Bank Group and Commonwealth and Development Office of the UK Government (FCDO) Multi Donor Trust Fund (MDTF), have supported Implementation of the National Development Plans with interventions carried out through at least seven government institutions, aimed to strengthen institutions, build technical capacity for relevant government officers, and develop decision making tools including relevant strategies, policies and guidelines, in line with the theory of change and having more efficient and effective systems for public investment management that will ultimately increase the returns on investments and thereby promoting faster growth and the country’s capacity to manage its debt.

In his opening remarks, Professor Eria Hisali the Principal College of business and Management Sciences (CoBAMS) who represented the Makerere University Vice chancellor highlighted how 0.6 of every dollar invested is lost hence the need for capacity building and research amongst government institutions to maximize returns. “Having done this we shall have created a huge data bank for policy makers, it is our sincere hope that then all government projects will be subjected to public scrutiny of our center so that we enhance productivity of our public investment”, added Prof Hisali. He extended the University’s appreciation to World Bank and the Commonwealth and Development Office of the UK Government (FCDO) through UKaid for the tremendous financial support rendered in establishing the PIM Centre of Excellence.

On behalf of the World Bank, Ms. Mukami Kariuki, The World Bank Country Manager for Uganda said that such policies help to provide economic stimulus and enhance the stock of public assets even in the times of crisis like the Covid 19 pandemic, which can contribute to the achievement of the long-term development goals of growth and development and poverty reduction.

Ms Kariuki reiterated how clear it is that high levels of investment cannot yield returns if the quality of projects remains poor and that it should take government and stakeholders high efforts in combating such a big challenge through favorable policies and considerable reforms.

She commended government of Uganda for aiming at building capacity of government officials and other stakeholders, and developing decision making tools to increase return on investment thereby promoting more rapid growth.

“We are happy to witness the progress made on strengthening the ‘gate-keeping’ role of the Ministry of Finance. Through tapping into technology, GoU has developed the Integrated Bank of Projects, an online information portal to streamline preparation, appraisal, and monitoring of execution of public projects,” said Ms Kariuki. “The World Bank will further engage the government on its Public Investment Management (PIM) agenda, especially on strengthening its PIM policy and regulatory framework, and a financing strategy to manage public debt and ensure a return on investment”.

She closed off by asking government to focus on demonstrating value for money of public investments, building capacity of ministries and its officials and other implementing agencies in project preparation, reserving resources to facilitate implementation of feasibility studies during the pre-investment stage and   formulating a policy framework for public investment management to allow the public scrutinize such investments.

Jordan Martindale who represented the FCDO and British High Commission highlighted the importance of Public Investment scrutiny as a business to every tax payer. She said the systems underlying the appraisal, implementation and monitoring of these projects need to be strengthened.

“It has been great partnering with Government with Uganda as they increase their ability to effectively deliver improved Public Investment Management.  Delivering governments investment pipeline in a manner that offers value for money, timely delivery and the attainment of development outcomes is crucial for achieving  the National Development Plan III goals. The UK’s investment of Ush42.3 million over the past 5 years has led to evident efficiency gains including an improvement in the capital spending absorption rate which has risen from 60% in 2017 to 86% in 2021, a 4-fold increase in the use of Cost Benefit Analysis to assess projects submitted for approval into the Public Investment Plan, and the successful leveraging of about $600 million in additional development finance,’’ Kate Airey OBE, said

While launching the Public Investment Management (PIM) center of Excellency, the commissioner Ministry of finance, Planning and Economic Development Mr. Ashaba Hannington who also represented the minister Hon Matia Kasaija said the theme for the open day was in line with the government strategy for Economic Development through strengthening the country’s competitiveness for sustainable wealth creation, Employment and  hopes to achieve it all through the implementation of the Nation Development Plans.

“Through this reform agenda, the Government has improved her processes including improvement on screening projects before admission in the public investment plan, decrease in number of non-performing projects, accountability on finances through verifiable output and improvement in mechanism of Entry and exit of projects from the public investment plan.

Commissioner Asaba thanked the funders, implored them for more support and pledged government’s support for the Center to ensure successful implementation of government interventions including the newly launched Parish Develop Model.

Professor Edward Bbaale, the Dean School of Economics and the principal investigator for the Center of Excellence said the center looks at building capacity amongst trainers to effectively deliver standardized PIM content, conducting short courses to improve the country’s capacity in PIM, offering professional support as an independent external evaluator to the development committee of Ministry of Finance, Planning and Economic Development (MoFPED) and carrying out research towards improving the PIM framework in Uganda.

He therefore thanked the world bank for the grant, the UK government, Ministry of finance planning and economic development, Department of Project Analysis, Makerere University Management particularly VC’s office by offering space to house the PIM center of Excellence, CoBAMS fraternity and Cambridge resources international for the support and collaboration.

About eight government institutions showcased innovations and research findings from the grant given by the world bank and FCDO among which included the PIM center of Excellency that disseminated research findings on the impact of Covid-19 on public investment management in Uganda and the impact evaluation of the Uganda clean cooking supply chain expansion project that focuses on households’ access to cleaner cooking technologies and the Impact of the Luwero Rwenzori Development Program. The National Planning Authority exhibited their building planning capacity for spatial data and greater Kampala metropolitan Area while the Public Procurement and Disposal of Public Assets Authority (PDDA) showcased the Electronic Government Procurement system that enables disposal and procurement of public supplies, works and services through the internet.

Uganda Revenue Authority (URA) showcased its contact center upgrade with voice and chat infrastructure containing interactive video response and incident management to enhance simplicity to clientele and innovations in revenue mobilization. The Uganda Ministry of Lands and Housing exhibited its program that focuses on readying the country for actualization of shared infrastructure corridor and physical development plans operationalization.

The Ministry of Agriculture, Animal Industry and fisheries exhibited the UgIFT Micro-scale irrigation program an intensified solar sprinkler system offered at a subsidized price to empower farmers while the Prime Minister’s office showcased its Enhancement of Productivity, Accountability and Knowledge Systems for Improved Public Investment Outcomes in Education and Health Project.

The newly launched PIM center for Excellency, equipped with high IT equipment and videoconferencing technologies to support training.